Spine is an animation tool that focuses specifically on 2D animation for games. Spine aims to have an efficient, streamlined workflow, both for creating animations using the editor and for making use of those animations in games using the Spine Runtimes.

Animation in Spine is done by attaching images to bones, then animating the bones. This is called skeletal or cutout animation and has numerous benefits over traditional, frame-by-frame animation:

Spine is packed with features to keep you productive while building great looking animations. Beyond the many editor features described below, the live demos for the Spine Runtimes show how animations can be layered and blended to achieve all kinds of dynamic behavior.

The dopesheet is at the heart of animating. It provides a detailed view of all the timelines that make up an animation and allows fine adjustments to be made to the animation's timing.

The graph defines bezier curves for interpolation between keys, allowing for much more life-like movement.

Edit animations while seeing exactly how they will behave at runtime. This is crucial for transitions and crossfading between animations, as well as for applying multiple animations concurrently. For example, run and shoot, swim and shoot, etc.

Constraints can be defined to animate using inverse kinematics (IK) and the Pose tool uses multi-bone IK to quickly pose a skeleton. 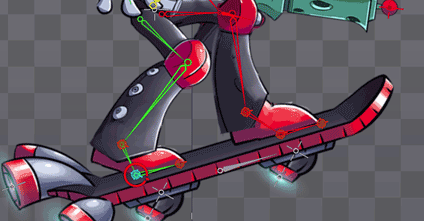 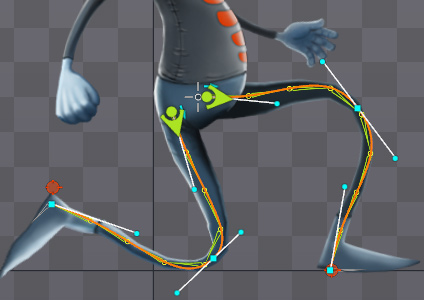 Skins allow switching between sets of attachments. They provide organization for attachments and enable animations that change attachments to be reused for different characters. 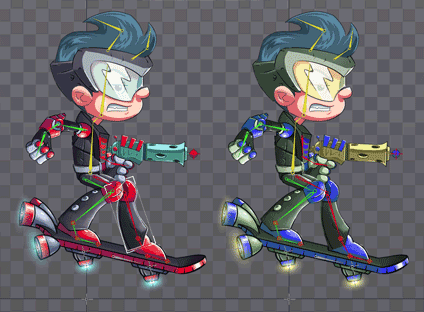 A bounding box is a polygon that is attached to a bone. Like images, the polygon is manipulated as the bone moves. This can be used for hit detection and physics integration. 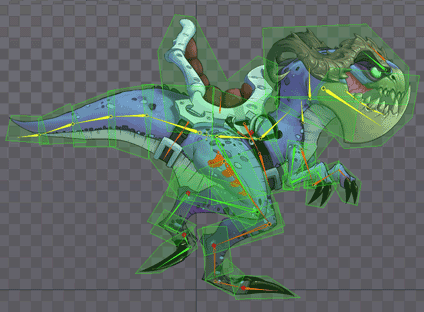 Instead of drawing rectangles, meshes allow you to specify a polygon inside your image. This improves the fill rate because pixels outside the polygon won't be drawn, which is especially important for mobile game. Meshes also enable FFD and skinning. 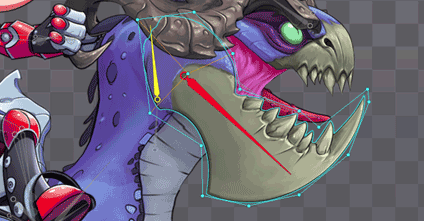 Weights (often called "skinning") allow individual vertices in a mesh to be attached to different bones. When the bones move, the vertices move with them and the mesh is deformed automatically. Posing a character with images that can bend becomes as easy as just positioning the bones. 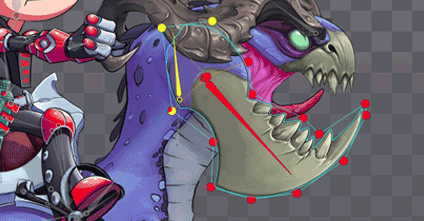 Spine exports animation data in its own, documented JSON and binary formats which are ideal for use with the Spine Runtimes. Spine can also export animated GIFs, PNG or JPEG image sequences and AVI or QuickTime video. 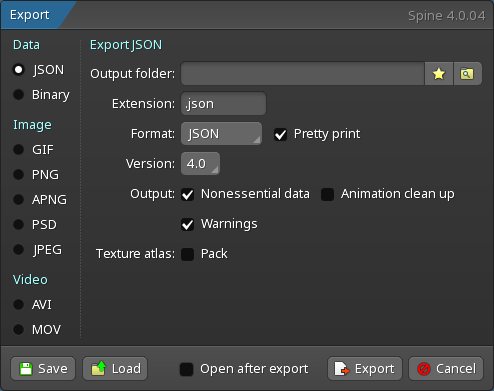 Spine can import data in its JSON or binary formats, which enables a path to import data from other tools into Spine. Skeletons and animations can also be imported from other project files.

Spine can pack images into a texture atlas or spritesheets, which results in more efficient rendering in your games. Spine's texture packer has many features such as white space stripping, rotation, automatic scaling and more. 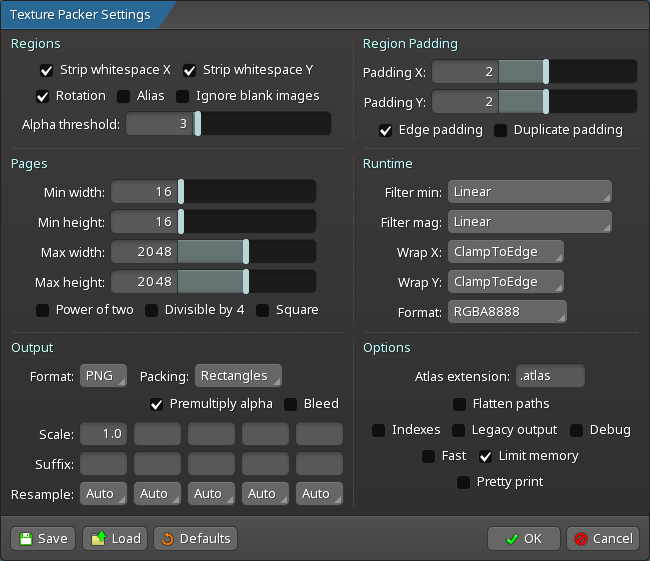 Spine is under active development. We often do multiple new releases per week. You can track our progress at a granular level by keeping an eye on the changelog. For a higher level view of what we have planned on our roadmap, please see our Spine roadmap. You can comment on tasks and subscribe to receive email when they are complete.

Not only are we constantly implementing new features, we continually improve and polish all aspects of the software. Often this is directly as a result of feedback from our users. We love hearing what works and what doesn't, so please head to the Spine forum and share your thoughts!

Get started right away!

Support Spine development by purchasing Spine and enable save, export and use of the Spine Runtimes.

Axe in Face 2 needed a lot of animated characters on the screen, without compromising quality or performance. We also needed the ability to change outfits for our main character with minimum effort. We accomplished all of these goals using Spine and we think that it is an excellent animation tool!— Søren Lauge Boll, Funday Factory